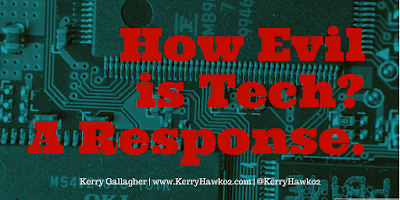 I believe in the power of technology to connect people, to empower people to be creative, and to open doors to opportunities that would otherwise be closed. This does not mean that there aren't mistakes that people can make with technology. I have made it my mission and my work to educate people so they can know the difference and use technology to make real positive change in their lives. Unfortunately, in a recent op-ed for the New York Times, David Brooks focuses only on the mistakes and boldly states:

"Some now believe tech is like the tobacco industry — corporations that make billions of dollars peddling a destructive addiction. Some believe it is like the N.F.L. — something millions of people love, but which everybody knows leaves a trail of human wreckage in its wake."

Brooks starts his argument by talking about teenagers. He references data from Jean Twenge, to whom I responded in this recent post, showing that teens on social media are less likely to "hang out with friends, date, and work." He failed to recognized data that demonstrates today's teens are actually more healthy than their parents were as teens. The Center for Disease Control recently found, and Vox.com reported, that today's teenagers are 46% less likely to binge drink and 21% less likely to have tried alcohol at all than 20 years ago. The percentage of teens who smoke cigarettes is down from 34.8% twenty years ago to 10.8% today. Teen pregnancy rates are also dropping. In many ways, perhaps due to more options for how to connect with their peers using social media, teens actually feel less compelled to engaged in risky behaviors. We are looking a new pattern of teen social behavior. New does not necessarily mean worse. In many ways, these new patterns are healthier.

The second concern expressed is the "compulsion loops" that capitalize on "dopamine surges" with social media use. The research behind this phenomenon is the basis for much of my recent work – as a blogger and speaker – for educators, students, and parents. Brooks argues that media companies like Facebook and Snapchat use what they know about our biological responses to certain stimuli to increase their profits. There is plenty of research from UCLA, Harvard, and more that demonstrates how posting about oneself on social media and getting likes and comments help with those "dopamine surges". Just as parents faced the reality of helping their children learn healthy nutritional balance with the increased popularity of fast food in the late 20th century, today's parents and teachers must help their children understand this research and learn how to balance healthy intake and production of media in an era of media-overload.

The third proffer in the op-ed is that tech companies produce and sell "technologies [that] are extremely useful for the tasks and pleasures that require shallower forms of consciousness, but they often crowd out and destroy the deeper forms of consciousness people need to thrive." When Brooks makes this assertion, he fails to recognize that the users of technology are the ones in control of whether they are using "shallower" or "deeper" forms of consciousness. Technology itself it not evil or good. Technology creators and users determine whether they will create and use tech tools toward positive and active purposes. These uses include connecting with far away colleagues/friends/family, collaborating on a movie/infographic/digital artwork, building momentum for a social movement, and more. Does this mean that those creators and users will not make mistakes at times or indulge in some of those "shallower" activities? Of course not. Just as we indulge in a bowl of ice cream or a glass of wine, it is permissible to indulge occasionally in a game of Clash of Clans or a scroll through an Instagram feed. It is up to us to share our positive digital products far and wide, and to own up to our mistakes so that we can learn from them and use technology better moving forward.

Brooks closes saying that he wants tech to "pitch itself" with "realism" and "humility." He says, "Imagine if instead of claiming to offer us the best things in life, tech merely saw itself as providing efficiency devices. Its innovations can save us time on lower-level tasks so we can get offline and there experience the best things in life." I certainly agree that offline time engaging in hands on, in-person, nature-filled experiences is an essential part of being human. Tech can never offer us those things. In fact, tech is incapable of "pitching itself" to us at all. It's creators can, but remember that those creators are also users. Blaming the tech itself is not helpful or useful. It is step back from taking personal responsibility for our behaviors and encouraging our children to do the same. We need to shift mindset away from blaming the tech, step up, and take action toward living healthy, positive, productive, full lives in a tech-rich world.
digital citizenship