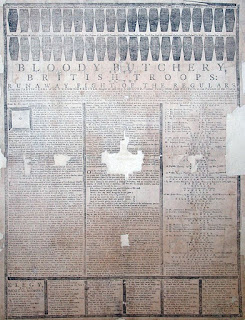 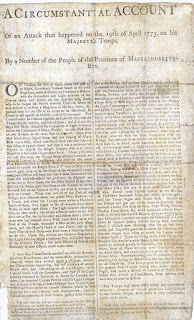 Posted by Kerry Gallagher at 5:09:00 PM No comments: Links to this post

Wordle One-Upped: I Tagxedo-ed My Blog

Upon the suggestion of a friend and colleague who commented on a previous post, I went beyond Wordle and "Tagxedo-ed" my blog!


Thanks Danja (a.k.a. @MagistraM on Twitter or read her blog, Magistra's Musings) 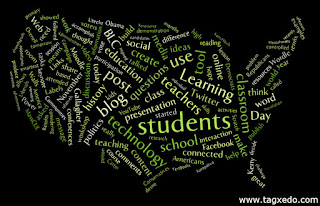 I like the newest large word: LEARNING! Now that one makes me happy.

What makes Tagxedo better than Wordle?

Posted by Kerry Gallagher at 4:35:00 PM No comments: Links to this post

Wordle is an easy-to-use tool that can help teachers and students analyze primary source documents, poems, blogs, or anything else that contains text. I have used it with my students before, but a video blog that Howie DiBlasi tweeted this morning reminded me to check it out again.

This is how Wordle works:
Once you enter the text, Wordle creates a word cloud that makes the words used most often appear more prominently. I thought I would Wordle this blog, to see if I am truly addressing the topics I set out to address when I started it: history, politics, and technology in the high school classroom.

I have to admit that I was pretty happy with the results:

The Results that Made Me Happy

The Results that Surprised Me

Teachers often complain that students are only driven by physical needs and their shallow desire to bring their GPA to the highest number possible. We want our students to have their physical needs met before they enter our classroom, so they are ready to embark on the 1 hour adventure we have planned for them. We want our students to be excited to learn the content, because we are passionate about teaching it. As a result, we sometimes tire of calling on a student who has raised his/her hand only to hear questions like:
In an effort to lift my own spirits and remind myself of the natural curiosity my students have, I decided to sit down and write some of the great questions I have heard lately. Here are some examples of great questions my students have asked me recently:

These are just the questions I thought of in the 10 or 15 minutes I took out of my preparation period today to type up this post. I'm sure the rest of you have many more examples from your own classes. What great questions have your students asked you lately?

Posted by Kerry Gallagher at 9:57:00 AM 3 comments: Links to this post

I have been reading some of the bloggers' reactions to John Stewart's rally in Washington D.C. this past weekend. Stewart always adds quite a bit of humor to his liberal-leaning presentation of the news. He was joined at the rally by his dubious conservative counterpart on Comedy Central, Stephen Colbert.

Here is a short clip of the opening festivities:


While the introduction is comical, it is delivered with intelligence and sharpness that have made Stewart a success. This is exactly what young Americans who are still interested in politics, despite the anger and mediocrity with which the talking heads deliver it to us on network news, are searching for. Despite the stereotyping, young Americans do not require everything to be entertaining (well, maybe some of them do). The larger point is that the political parties that run the elections and government have become farther and farther apart, leaving most young Americans standing in the middle trying to decide between two somewhat ridiculous options:

What about the rest of us?

What do the voters think... I mean on their OWN, not based on what the parties tell them to think through unending mailings, emails, and campaign tv and radio advertisments?

What about FUTURE voters?

Tomorrow, I plan to ask my students

Those of you who are reading this and are parents or teachers or just citizens who know teenagers, I beg you to have a similar discussion. They are future voters. They see all the same media that we do. They need to tools to filter all of it and then make an educated decision based on how THEY think and feel, not based on how the media TELLS THEM to think and feel.