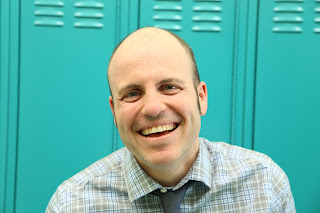 I’ve long taught the value of diversity, tolerance and understanding of others’ points of view.  For some time I served as co-advisor for our campus Civil Rights Team, developed interactive theater experiences around social justice issues, and raised consciousness in my classroom through music and film.  But it wasn’t until I adopted design thinking -- empathy-fueled, human-centered problem solving --  as my preferred pedagogical lens that I became aware of how useful intentional empathy could be in the content areas.

What follows is something of a prototypical day in my English classroom at Mt. Blue Campus, a regional public high school nestled into the foothills of rural western Maine.  Here’s hoping this little bit of context and application inspire some ideas of your own.


Ninth Grade English:  Empathy Maps to Understand Character in Of Mice and Men


My crew of ninth graders love to build and tinker and create stuff.  LEGO bricks, Jenga blocks, miscellaneous bits and pieces from our Maker Cart -- the materials matter little to these folks.  They just want to create.  George and Lennie’s dream of homestead and the current economic climate in Maine inspired a design challenge:  How might we design a tiny house for the dreamers in Of Mice and Men?  To get us there, we would use Mary Cantwell’s DEEP design thinking process, the second phase of which calls upon the designer to empathize with the user.


On this particular day we first had to identify our users: who are the characters for whom we are designing?  George and Lennie are the obvious users, but we also had to recognize Candy’s role in making the homestead feel more like a reality and Crooks’ offer to join them in the endeavor.


Once our users and characters were defined, we had to identify their needs.  The text serves as surrogate for an interview with the dialogue providing the subject’s words, the narration, the subject’s actions and behaviors.    Using Crooks as an example -- a character chosen deliberately because he appears less frequently and provides less concrete desires about the homestead -- I quickly modeled for students how we can analyze what a character says and does to generate a simple hypothesis regarding what they may be thinking and feeling.   I explained that our words can reveal our thoughts on a subject, while our actions and body language can relate our feelings.  Often, what we say may not align what what are doing and those are the tension moments where what’s really going tends to be revealed.

Typically, empathy maps are used by designers to unpack interviews. Again, for our purposes, the dialogue serves as “say,” and the narration serves as “do.” The dotted lines are there to emphasize the fluidity in the thinking and the interrelations between all four quadrants. 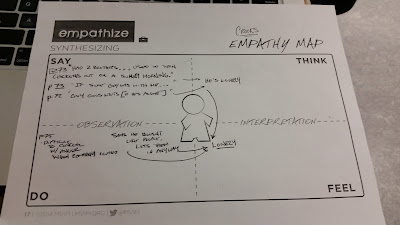 In this very quick modeling for them, using MVIFI’s organizer,I wanted the students to see that Crooks, while he may initially say he wants to be left alone, invites the others to come and sit and that this likely relates a loneliness.  This opened up a conversation about other characters who may feel loneliness, how the homestead might be able to relieve those feelings, and how all of these troubles and dreams affect the impact of the novel’s ending.

This was also a great opportunity to teach students about the power of ellipses when quoting from a text.  I didn’t want students spending all their time writing down quotes, but I did want to make sure their observations were documented.

Humanities:  Designing Sanctuaries for Others and Speak

Despite having taught Laurie Halse Anderson’s Speak for over a decade, I continue to find opportunities to explore the text in new ways.  As Grade 9 Humanities is team-taught by English and social studies teachers in the same room at the same time, we wanted a project that would explore current events, emphasize major themes of the novel, and provide an opportunity for students to create.  Earlier in the fall, one of our students’ Cardboard Challenge turned out to be a sanctuary for her classmate.   The idea of having a sanctuary is vital to protagonist Melinda Sordino’s experiences in Speak.  Right now hundreds of thousands, if not millions of people in our world are seeking refuge and safety.  Thus we challenged the students:  How might we design a sanctuary for others?

We provided three potential users:  another member of the class you do not know well, a refugee or asylum seeker, or a character from Speak who is not Melinda.  Two of the three would provide an opportunity to demonstrate content knowledge, the third being an opportunity to grow our classroom culture, and all would require deep intentionality.

Providing structured time to explore each of the potential user classes afforded multiple angles into the novel’s themes.  We investigated the Syrian refugee crisis and the rhetoric surrounding the current Presidential race and immigration reform, comparing and contrasting those positions to those expressed by characters in Speak.  We ran a rapid prototyping session, partnering and creating mini-sanctuaries for one another using items off our maker cart including LEGO bricks, Jenga blocks, and assorted recyclables and crafting materials.  And we explored Halse Anderson’s use of symbolism in the text and the insights it provides us into the various characters’ experiences and points of view.

Step 3: Experiment and Create Based on Users/Characters’ Needs.

One student didn’t realize her sister’s college roommate is a Somalian refugee who moved to Kenya before coming to the United States and attending college in rural Maine.  This video reveals the prototype our student developed, her process of learning about her user, and the intentions behind the design.  (And this video features a brief critique of her work.)

And some students demonstrated deeper understanding of characters in the novel, such as this student who shared her process of designing a sanctuary for Speak’s Mr. Freeman.

On my blog, I’ve documented use of empathy maps, design process, and making artistic representations to demonstrate understanding of literature, in this case the characters of Cunningham’s The Hours.

Here, I wanted to express a more utilitarian approach to empathy in the class: asking what your partners need.

As I write these words, we are wrangling with a long term design challenge in AP Lit:  How might we design effective on-demand analytical essays?  We are using the DEEP process to get us there and have used the last month for our Discovery phase.  Using Diigo’s group collaboration features, we’ve been collecting resources and information related to effective timed writing in hopes that we’ll be able to find some trends and uncover some best practices, as well as the needs of the user: those who score AP Lit essays.

But rather than just find anything and everything -- which while having some merit can also feel overwhelming -- I had has run a very quick, 20 minute “design sprint” based on the needs in the room.

Step 1: Define Your Users.
We quickly (two minutes -- use a timer, it matters) brainstormed search terms to use for our research.   This was our mini-discovery phase. 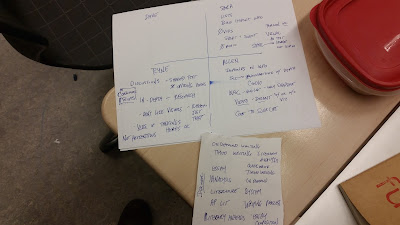 Then we took the time to interview one another about how we like to consume our information.  Digestible chunks?  Long form articles?  Video?  Audio?  And we took time to discuss why we prefer our information in these ways.  It was important that no judgement was cast, that trends were identified across the room, and outliers were honored.

And here’s where the empathy phase played such an important role.  In identifying the trends in the room about what formats of information are most helpful and useful, our next ten minutes for searching  -- our experiment phase -- was that much more focused and more likely to generate meaningful results in our shared Diigo links.  During production phase feedback, we noted the trends across what we found -- many lists, some scorer critique, few long form articles.

Students now need to annotate what they found and it may be that closer inspection finds these links less than purposeful.  That’s all part of the learning process though and least that revision will be guided by empathy and the meeting of a need rather than score point on a rubric.

This is perhaps the greatest value empathy brings to the classroom.  We so often discuss the challenge of making learning relevant -- especially in middle and high school classrooms.   Exercises like those above push the focus away from grades and into the application of knowledge to solve problems.   When we embrace empathy as an avenue for understanding, we not only foster critical knowledge of the content, but provide students vital opportunities to set aside their own biases and meet the needs of another, a skill that will serve them well no the directions our students’ lives take them.

About the Author:
Dan Ryder is an educator, improviser and design thinker from the foothills of western Maine who spends every day trying to make the world a little more interesting than he found it.  A moderator of #dtk12chat and #edchatme, follow him @wickeddecent on Twitter, Instagram, and  Medium.  Keep tabs on his efforts to walk the talk on his classroom blog at flight307.blogspot.com and with his co-conspirators at Wicked Decent Learning.
Guest Post