September 26, 2012
After attending this summer's Primary Source institute in July, I was in a bit of a conundrum.  I wanted to introduce the idea of soft power to ALL of my students, but my freshmen do not study the era that we focused on in the institute, which was after 1898.  So, after much thought, some research, and one proposal submission, I managed to come up with a way to integrate soft power into the discussion of the United States government's first attempts at foreign relations in the late 18th century. 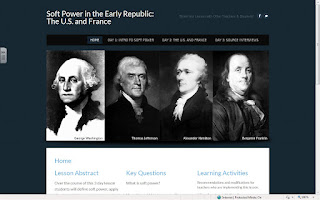 My hope is that students will gain an understanding of how goals can be reached on the international stage without threats and bribes.  I also hope they learn that these soft power tactics may have recently been renamed, but they have been used my leaders for a long long time.
french revolution George Washington international relations soft power