March 13, 2012
I am fortunate enough to be a participant in the final year of the History Connected program.  This year is called American Encounters: U.S. History in a Global Context.  Since our first school day seminar way back in October, there has been a lot of talk and interest in the integrated U.S. and world history curriculum here at Reading Memorial High School. We were even fortunate enough to have colleagues from Wilmington visit us a few weeks ago and sit in on some of our classes to observe the curriculum in action. It was refreshing to have the faces of enthusiastic professionals in our classes while we taught. As I look back to that October workshop and consider some of the documents that were discussed, a new great connection between world and U.S. history comes to mind.


Specifically, as we read through the Lincoln documents in an effort to get to know the man behind the myth, there were two that mentioned Louis Kossuth and the Hungarian Nationalist movement. In 1852, Lincoln was part of a call for a "Kossuth Meeting" and then helped run it and draft the resolutions from the actual meeting. These documents can help students understand what Americans at the time thought of the intense nationalism and fervor that was fueling the revolutions in Europe in 1848.

Some of the information presented to our sophomore students looks like this: 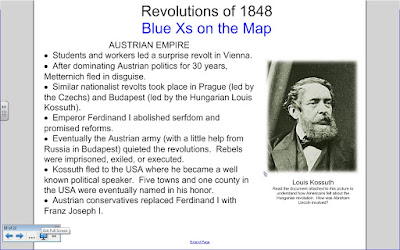 I added one element to make the connection between Kossuth and the U.S. (referenced in the 6th bullet) more clear. Under the image of Kossuth on the left, students are instructed to read the primary source documents that are attached. I have included a few excerpts within this post to illustrate what kind of information I would want students to notice in order to integrate U.S. and world history in this lesson.


It is proposed that a Kossuth meeting be held by the citizens and others now visiting the seat of government, on the 8th of January inst., at 7 o'clock P. M., at the court house in Springfield. All are invited to attend, and to express their views freely.

Some questions for students to research and consider:
Another excerpt from the resolutions of the meeting on January 8, 1852:


7. That we recognize in Governor Kossuth of Hungary the most worthy and distinguished representative of the cause of civil and religious liberty on the continent of Europe. A cause for which he and his nation struggled until they were overwhelmed by the armed intervention of a foreign despot, in violation of the more sacred principles of the laws of nature and of nations---principles held dear by the friends of freedom everywhere, and more especially by the people of these United States.

And then in the annotations, it is noted:


[1] Illinois Journal, January 12, 1852. Lincoln spoke to the meeting on the 8th in favor of sympathy but non-intervention.

More questions for students to discuss:
While students are learning about the concepts of nationalism, conservatism, and liberalism in the context of the European Revolutions of 1848, it is also valuable for them to understand what Americans thought of these political ideologies at the same time. Americans were not operating in a totally isolated environment. While the Atlantic Ocean provided them with a great natural barrier that protected them from the conflict, they were certainly aware of the strife and had their own views of who was right and who was wrong.

This is a very simple lesson tweak that can really help students understand how the world was interacting long before the Internet made it easy.  Sometimes, these short additional documents and small lesson adjustments are all it takes to make an integrated curriculum work.
history lincoln