My freshman honors students complete a long-term research project during the second semester that approaches history from two directions. First, they are providing a bit of biography of a key figure from the American Revolution. Second, they have to demonstrate an understanding of the themes of the revolution as a whole by explaining how that one person affected the direction of events. The result of the project is a 10 minute documentary complete with images, music, and student narration. 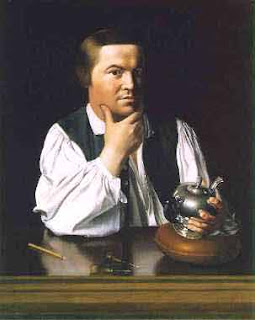 After reading David Hackett Fischer's Paul Revere's Ride, I confirmed that Paul Revere should definitely remain on the list of historical figures that students may choose for the project. The trick for the students who chose him last year was to sort out the mythology from the scholarly historical evidence. David Hackett Fischer’s book is definitely a source I will lend to the student(s) who select Revere this spring. He articulates the truth about Revere with eloquence and evidence, something we are striving for our students to accomplish.

Some of the characteristics of Revere that students should understand, in context of the impact an individual can have on the course of historical events, are:


While these are historical lessons, they are also life lessons. In order to have a positive impact on history, we and our students need to strive for these characteristics and values. I do not mean to imply that Revere was not flawed at all. He was human and he certainly made mistakes. But when all is weighed and measured, he did more right than wrong in helping to organize and struggle toward to goals of the Whig cause.