April 15, 2014
On this one year anniversary of #BostonStrong part of what we remember includes the suffering and bravery of those who were injured or killed. It was a day that both horrified us and united us. Part of the reason for those two different affects is that death is hard to talk about.

On this day of remembrance I had the opportunity to remember a different event that forced Americans to come face to face with death: The Civil War. Drew Gilpin Faust and Ric Burns talked about Death and the Civil War at Phillips Academy in Andover, Massachusetts. Their talk focused on Faust's book and Burns's film based on that book.

Their discussion focused on how the sheer numbers of dead created new realities and attitudes of death. 2% of the whole U.S. population died in combat or from disease during the war. That adds up to approximately 750,000 people. (Based on the U.S. population today, 2% would be 7 million people...dead.) In the South it was even worse: 20% of the male population between the ages of 15 and 45 were dead. How did the nation respond?
Here are my sketchnotes of the event: 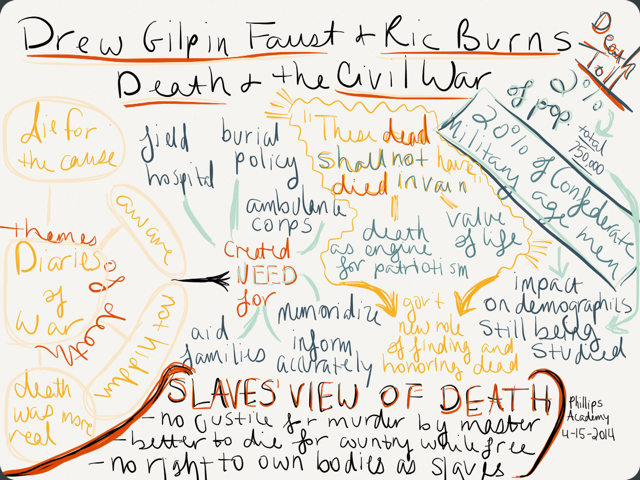 Bringing a discussion about death, which is hard to talk about, into a classroom full of wide-eyed teenagers is daunting. But it's important because death is part of history. I happened to have participated in a book club a few years ago through History Connected and developed a short unit as a result. Part of that unit asks students to analyze excerpts from Civil War letters meant to assure families of the "good death" of their soldier.
After returning home from the the Civil War discussion with Dr. Faust and Burns, I was able to sit on my couch, type up this post, and watch the premier of Ken Burns's The Address. It is the inspirational story of a boys' boarding school that challenges its students, who are learning disabled and have arrived at that school often as a last resort, to give Lincoln's famed speech at Gettysburg publicly to their teachers, friends, and family.  I found it fitting that the evening's discussion with Faust and Burns closed with the thought that President Abraham Lincoln gave the soldiers' deaths new purpose in the Gettysburg Address when he said,


"These dead shall not have died in vain."

He assured Americans that their sons', husbands', brothers' and fathers' lives had great value and that the nation would be rededicated and reborn so that freedom could be achieved across the nation. In the same way, the young boys in The Address are given a rebirth after working for months, and in some cases years, to memorize Lincoln's 272 words that consecrated that battlefield. Through this monumental task, they also experienced rebirth: one of self-realization.

So on the anniversary of #BostonStrong we can remember our history. Americans have suffered in the past and have learned and united as a result of that suffering.  Our history is also an important part of our identity, as the boys in The Address learned when Lincoln's words became their own. So talk about death, even though it's hard. But then, take the time to remember who we are. Remember that we are stronger together. Take to heart the lessons history taught us one year ago and 150 years ago. It is all part of being American.
civil war Memorial Day sketchnotes