Talking to Our Children About the President's Tweets

For adults this fast-paced tech-rich world can be intimidating. And yet, children are the focus of my work. Imagine how overwhelming this world can look to them!

While many dismiss that perspective and argue that they are "digital natives" for whom navigating our tech-rich world is easier, I know first hand that is it not.

Children are the focus of my work in 3 ways:


Often, when certain events occur – like President Trump's tweets yesterday that focused on insults rather than substance – I'm asked how we can realistically insist that children, adolescents, and teens refrain from acting the same way online. 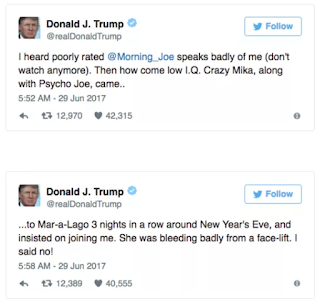 The truth is that all of us, children and adults alike, are learning how to use the powerful communication tools the online world has to offer. This means that all of us are making mistakes and learning from them. I had the opportunity to talk with CBS News Radio this morning and share my advice for parents and teachers. Click here to listen to the interviews.

For more resources to help in both the classroom and at home, check out ConnectSafely.org's parent and educator guides here.

The Freedom (and Consequences) of Our Students' Digital Speech

In the past two weeks, two big news reports based in my home state of Massachusetts demonstrate how crucial it is to teach our children about the impact even the smallest online communication can have. Despite these stories with no winners, we shouldn't censor our children. We should encourage them to share their highest quality work online, and have ongoing conversations with them about being upstanders when "drama" happens among their peers online. Here are the specifics: 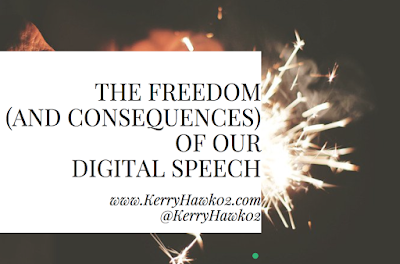 Harvard University revoked the admissions offers of 10 incoming freshman – recently graduated high school seniors – who created their own messaging group. The creation of the group was not the problem. According to the report in the Harvard Crimson, the prospective students "sent each other memes and other images mocking sexual assault, the Holocaust, and the deaths of children." The story made national news. It wasn't because of a few rescinded acceptances, a common practice for colleges this time of year. It is because of the reason for rescinding was new.

Today, in a courthouse in Taunton, Massachusetts, Michelle Carter was found guilty of involuntary manslaughter of Conrad Roy in a bench trial. Once again, it isn't the charge and trial that are shocking. It is the evidence and context for how Carter acted. According to the New York Times, "When he became sick from the fumes and stepped out, prosecutors said, Ms. Carter ordered him by phone [in a text message] to 'get back in.'” Roy was found dead in his car the next day.

In both cases, it was digital messages sent by teens in seemingly private contexts that led to serious public and life-changing consequences. When talking to your teens – whether they are your children or your students – about these two situations, here are some key messages they need to hear:

1. Be the Real You at All Times

Whether words are verbalized face-to-face or typed in a text message, they are representing your thoughts and your personality. What do you want people to think about when they think of your name? Are you someone who adds energy and positivity to a conversation? Are you someone who lifts others up? Are others grateful for the information and messages you share?

2. Take Care of Yourself and the People You Care About

3. Nothing is Private. Harness the Power of Public.

Both of the examples above involve messages and media exchanged between teenagers who believed they had privacy. Whether our shares are in the form of public posts, DMs, or text messages, the Harvard and Carter cases both illustrate the risk we take when tapping Post, Publish, or the share arrow. Rather than taking in this information and feeling handcuffed, our youth should feel empowered to make great change with the tap of a keyboard. If nothing is private, imagine how many people could be reached with innovative ideas, new artwork, and fresh music. Use this power of sharing for good! Avoid getting bogged down in any negativity.

How will we parents and educators frame this new era of online communication – and consequences – for the children and teens we care about? Will we fill our conversations with warnings and negativity? Or will we share these stories so that our children can feel a sense of duty to better represent their generation and build a positive vibe that drowns out the negativity?

Perhaps you think my ideas seem naive. I assert that they are not.

The balance of sharing positivity and protecting against negativity is the key to cracking open the digital world we all want for the future.
Posted by Kerry Gallagher at 6:20:00 PM No comments:

It's Never Too Early

Our children are eager to try out the devices they see their parents and older siblings using. Adults worry about how much time they are spending with screens.

As an educator, I understand the importance of incorporating technology in learning so that our students are prepared for the future jobs that await them. As a parent, I understand the desire many parents have for their children to explore the natural world and use their hands to create. It is possible to balance these two important goals. Here are a few ideas for parents and teachers of young children. (I've tested them with my own small children!)

The Simple Shift
My second grader sees me typing blog posts, watches my fingers move over the keyboard, and asks questions about how I use formatting features like headings and creating and adding images. Of course, now that she can read and write, she wants to record her own stories and ideas. Although she is young, with some help from our local public school district, she is set up with an school Gmail and her very own Google Drive. After watching me organize mine over the years, she thought carefully about what she wanted to name her folders. Then she started writing stories. Her first was about a neighbor with a haunted house who coaxed children with cookies to come in. Once she was done writing it she wanted to share it.

The Big Shift
So, the next step was to teach her how to share her documents. I showed her the  Share  button in Google Docs and taught her about email addresses. The first share was with her first grade teacher, the teacher she had last year. To her delight, two days later she found her teacher left comments on her haunted neighbor story. Now she was motivated to write and share more. As long as we are talking about who she is sharing with and how to properly communicate online, I'm happy to encourage her desires to write and share her ideas.

The Simple Shift
Responding to the outcries of parents, Common Sense Media is gathering funding to help them review and rate the most popular YouTube channels that our kids love. Common Sense is using the tagline, "Have you lost your kids to YouTube?" to motivate parents to donate.

Yikes. No one should feel like they have lost their own children.

An approach that has worked well for my family includes early exposure to YouTube with gradual release of control. It isn't foolproof and it isn't a silver bullet, but it forces ongoing conversations about media consumption as a part of our day-to-day lives. I started showing my children short online videos once or twice a day when they were babies – while I prepared a quick lunch, took a coveted private bathroom break, or tended to a sibling's diaper change – so they recognized online media and only saw short clips and content I was comfortable with. Then we'd sing the songs from the videos together. As they've gotten older, we've refurbished old laptops that they can use to explore YouTube, among other things online, as long as we talk about the search terms they are typing and the content they are watching. Their screen time is limited and is mixed with lots of outdoor play, reading, art lessons, and sports. It is all about teaching them how to balance.

The Big Shift
After finding a YouTube channel with sisters who challenge each other to fun contests, my two daughters wanted to learn how to make and share their own videos. This ignited a conversation between the 3 of us in which I asked how they wanted to plan the video. We talked about storyboarding, script writing, finding our props, creating a set in our house, and rehearsing. Then we completed all those steps! Once the filming was done, I walked them through the video editing process including adding royalty free music and on-screen titles and graphics. We even created a YouTube channel and uploaded their videos. So far is it private and we've only shared the videos with a few select family members. If and when they are ready to go public, we will decide together after a clear explanation of what "going public" really means in terms of feedback and online interaction with others.

The one theme consistent with all of these approaches to technology with young children is continuous communication with parents and other adults they can trust. Technology should not be used as a "babysitter" or a way to keep children quiet. Rather, it is just another tool children should be taught to use. Like many tools – in the kitchen, in the yard, and in school – it carries some risk. But just as we teach preschoolers to use sharp scissors with our supervision or encourage them to jump in a pool for swimming lessons, we need to teach that same age group how to navigate the vast and amazing online world through our devices.

There is no guarantee that my young children will not make mistakes with technology as they get older, even with these careful and intentional conversations we are having now. But when they do make mistakes, we can reference these conversations and remind them about our values and priorities. Their digital record will be so overwhelmingly positive and their mistakes will be vastly outnumbered by the goodness they've shared.

What do you do with your youngest children/students to teach them about devices and the internet?
Posted by Kerry Gallagher at 7:00:00 PM No comments: