Showing posts from February, 2014
Show all

Watching Videos is Now an ACTIVE-ity

There are so many great historical documentary films out there.  PBS and Ken Burns come to mind immediately as producers of the the best ones.  However, there is a fine line between learning from a film and sitting in the classroom while a film plays.  Many students, often unintentionally, miss key parts of documentaries showed in class simply because it is hard to maintain undiverted attention to the screen.

Here are a few strategies to help solve that problem.

Backchannel with TodaysMeet A few months ago I wrote about my first experience with backchannel in my classroom.  Since then I've used the strategy many more times and each experience has been better for my students and myself.  This strategy works best for longer screenings that last at least half the duration of a typical class period.

How to Do It Set up a backchannel chat room on TodaysMeet.com. You can decide how long the transcript will be available in advance; from one day to one year.  Give students the URL of the …
1 comment
Read more 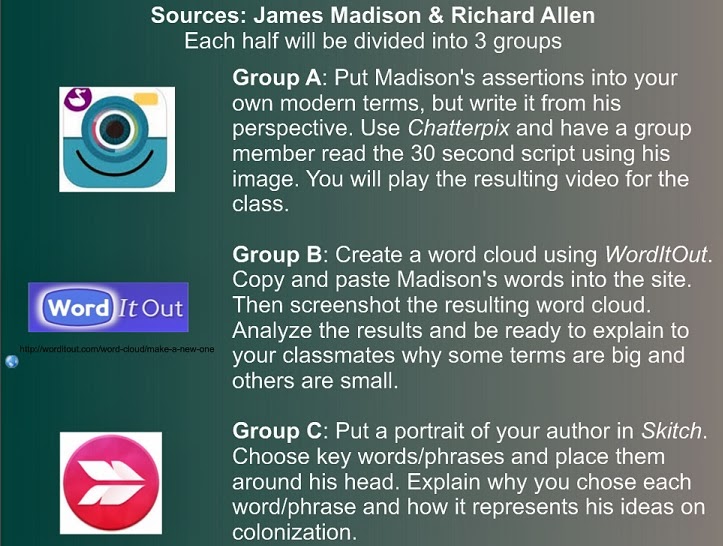 The Friday before a week-long February Break... deadly for student engagement.

Class Set Up After all students read a short background explanation of what the American Colonization Society was, I divided my class of 24 students in half: 12 read excerpts from James Madison's "Plan for the Emancipation of Slaves" from June 15, 1819 and 12 read excerpts of a letter from Richard Allen, Freedom's Journal, November 2, 1827 (Vol. 1, No. 34). Madison was i…
Post a Comment
Read more 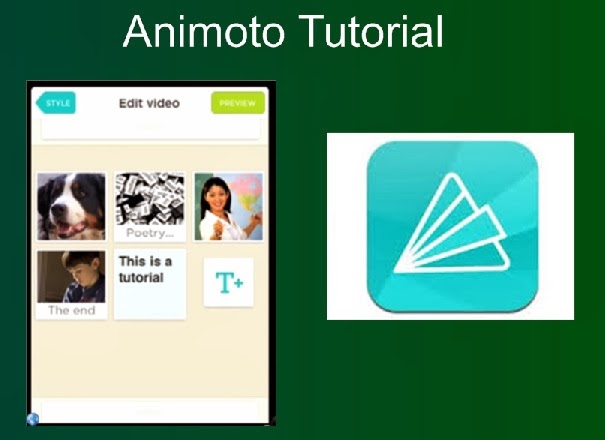 After learning about how my colleague, Annemarie Cory has been using Animoto to teach MacBeth...
Watch my video on @animoto called "Sequence and Summary of Act 1" http://t.co/f0PXU85zs7
— Annemarie Cory (@AnnemarieCory) February 9, 2014 ...I was inspired. I could make a dry lesson really engaging if students had an opportunity to make tourism commercials for one of the first 13 American colonies!

(Disclaimer: Yes, I know a television-style commercial for a time and place in 17th century is anachronistic, but my students know that too.  They know the colonists didn't have TV, but they also now know why each of them was founded and how people lived day-to-day if they settled there.)
What Does a Good Tourism Commercial Look Like? First, students watc…
Post a Comment
Read more 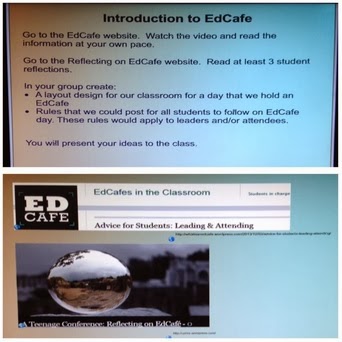 My students and I have tried a lot of different discussion formats in my class: Socratic Seminar, informal Q & A, bean bag toss, and everything else I could think of over the years. Some were too formal and students were almost too nervous to participate. Others were in groups that were too large and not everyone was heard as much as they would have liked.  Sometimes the success depended on the time of day: morning classes were super quiet while afternoon classes were hard to control.  In all cases, discussion was framed around teacher goals and not around student inquiry.

Learn About Being an EdCafe Facilitator The ultimate authority on EdCafe is Katrina Kennett, she is the creator of the What is an EdCafe? website.  Within the website there is a guide for teachers and a guide for students.  There area also contributions from other teachers (like Alexandra Horelik) who have cr…
Post a Comment
Read more 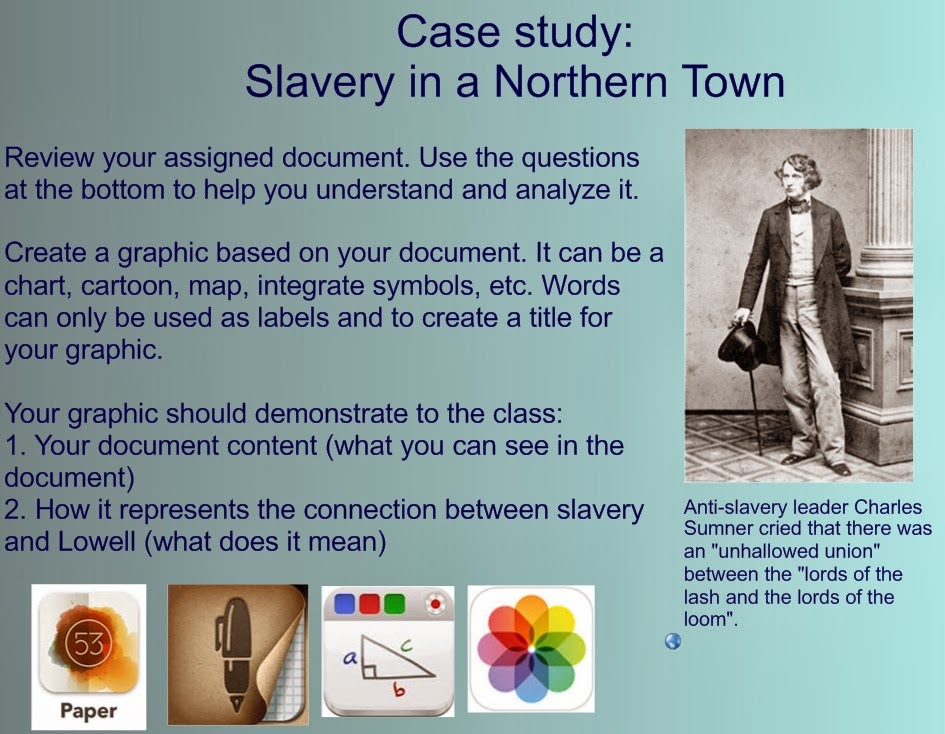 I've used the National Archives document analysis sheets, the guided questions and charts from the DBQ Project, and lots of other formats of primary source analysis with my students.  They are all excellent tools, but they aren't FUN for kids.  I want students to be fascinated with evidence from history the same way I am.  I want them to see a connection between what a document says and what life may have been like for the people who wrote those words.  I've posted in the past about how non-traditional note-taking can be more valuable for student learning than previously thought.  I thought I'd apply that concept to primary source analysis.

Last week I asked them to create some kind of image representation of a primary source document and how it helped answer our essential question:

Was the Antebellum North really morally and economically opposed to slavery?
You see, my New England students have traditionally been taught that the South favored slavery and the North opp…
Post a Comment
Read more 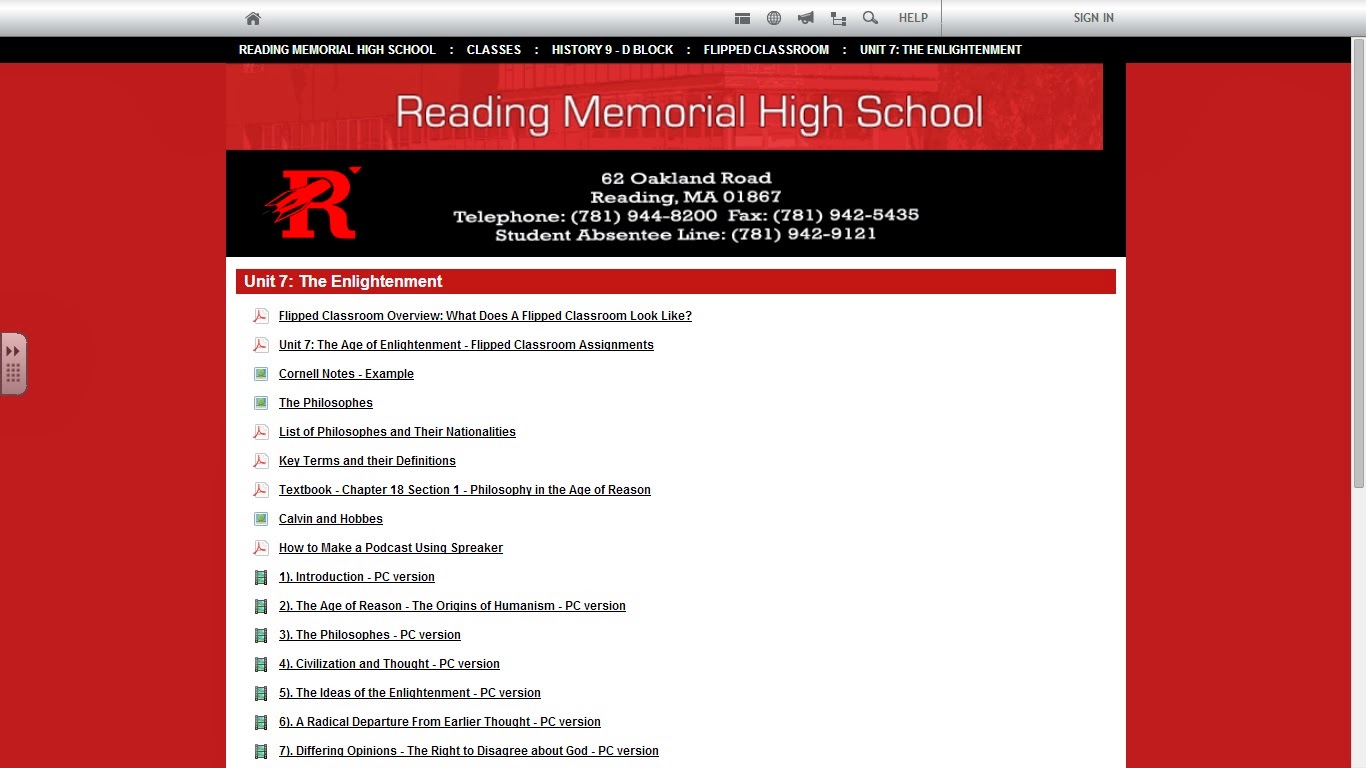 I had the opportunity to observe a colleague, Gary d'Entremont, recently.  He has done a complete 180.  Literally, he has flipped his classroom for the entire unit on the Enlightenment in our school's History 9 curriculum. I actually had some of his current students in my 8th grade classroom last year.  It was rewarding to see them working at a higher level, and I experienced my own enlightenment when it came to the flipped classroom model thanks to this experience.

Here's how Gary does it.

1. Preparation
Gary set up his class website (our district uses Edline) so that all materials students will need for the 2 week unit were there before they began. Explanations on what a flipped classroom is, what student responsibilities are, and how to carry out each of the tasks are clearly labeled and easy to read.

2. Formatting
The text documents are posted in .pdf format.  This makes it easy for students to view them without awkward formatting problems, which can occur with Word Do…
Post a Comment
Read more
More posts