January 18, 2017
Teaching our children and students how to recognize fake news is a good first step, but it should not be our goal. I wrote about the spread of fake news recently and shared a variety of research, data, and resources for teachers to help students develop media literacy skills. But I think that I – and many of my peers who have written and shared with urgency about fake news – stopped short of what is really needed.

We need to go farther. We need to teach our children what to DO once they have determined an article or image is fake news. Here's why we need to take this next step, and how we can do it together. 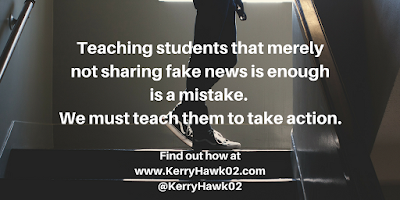 At it's worst, fake news has caused violence – as in the case of the man firing a rifle in a pizza shop after reading a fake online article that the restaurant was "harboring child sex slaves" inside. Sadly, the man in this situation is not the only adult who has fallen for fake news. Pew's recent research indicates that nearly a quarter of adults admit to sharing fake news in the past and most of them didn't know it was fake when they shared it. (I'm not sure whether it is more or less disturbing that some of them shared fake news that they knew was fake.)

Taking action to debunk fake information and prevent it from spreading is essential if we want the internet of the future to be a positive place where we can find what we need, communicate with others, and grow together.

One way to help your students understand how sharing fake news can lead to misunderstandings, anger, and even violence is to share this video with them.


Don't worry, I've checked to ensure the accuracy of the information in the video on Snopes.com. After showing the video, ask your students if they have:

It is critical that these conversations do not include blaming or finger-pointing. Adults and children alike have been fooled by fake news and have shared fake news. Make it clear to your students that we are learning together and need to become better consumers and sharers together.

Right now my favorite resource is this ten question checklist from The News Literacy Project and Checkology.org. This easy-to-use list is starting to gain traction at both the middle and high school levels. I like it because it helps students calibrate their gut-check when it comes to online information. 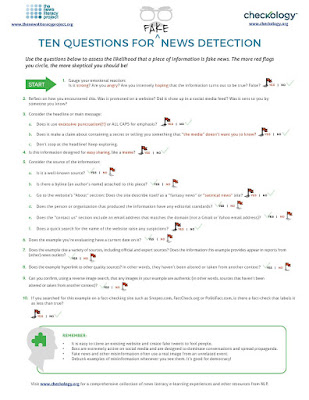 While it is important to teach students how to investigate the reliability and origins of an author or website, their gut check will help trigger those investigations. This list of questions from ConnectSafely can help learners dig deeper when investigating fake news.

But once students have identified that something is fake news, is refusing to share it enough? For decades we have told students to stand up to bullying and teasing and that being a bystander is not permissible. We need to apply this same standard to fake news. We need to teach our students and friends how to stand up to fake news without provoking more conflict.

Teach students how to confirm that information is accurate. The most viral articles and images that turn out to be fake news are outed quickly on websites like Snopes (my personal favorite), FactCheck, PolitiFact, and Poynter. For instance, one of the most shared fake news stories in the midst of the election of 2016 was a story released by the Southend News Network reporting that Pope Francis has endorsed Donald Trump. If a student used the 10 question checklist above and believed the story to be fake news, that belief could be corroborated by reports on:

Adolescents, teens, and adults who see fake news and simply scroll further down their feed are acting as bystanders to the fake news phenomenon. For decades we have told students to stand up to bullying and teasing and that being a bystander is not acceptable. We need to apply this same standard to fake news. We need to teach our students and friends how to stand up to fake news without provoking more conflict. We can do this by scripting comments and responses. Here are a few examples:

If your learners are even more progressive and are willing to share the truth on their own timeline – and not merely in the comments responding to the posts of others – here are more examples:


We can all raise the bar together. Our end goal should not be to merely teach student to analyze the media they consume, but also how to create a share media that makes the internet a better place. Use these strategies when you use social media and be sure to share these strategies with your students, too.