May 08, 2013
One of the challenges of being a middle school history teacher is that adolescents are a little too old for the simple story-telling and artsy projects of elementary school, and they're too young for real in-depth research on complex topics like in high school.  Where is the middle ground for middle schoolers?

Recently, we presented about our successful experiment at the Blue Ribbon Blueprint for Excellence Conference. Click the screenshot below to go to the website we used to structure our presentation. 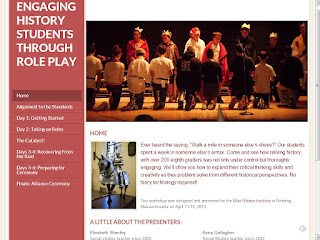 On the first day of our simulation, students found out which kingdom they belonged to and which role they were assigned.  The had to research both the kingdom and the role and write a blog post about their identity.  The responses demonstrated the understandings they developed from that research.

"The Normans were originally Vikings from Scandinavia but then made their voyage to England and were no longer considered Vikings. Normans ate vegetables and any crops that they could grow. They also enjoyed hunting, which was not only considered a way to get food, but also a sport, involving the use of dogs and falcons. The prince of the Normans had many duties. Since he is the heir of the throne, his father the king must train him to be a powerful and mighty leader. Also, the king is to transfer responsibility bit by bit to the prince until he is king, so that he can be better prepared to rule."
-Niles S.

On their second day they got down to the business of fulfilling their roles.  They were enthusiastic, sometimes frustrated with the amount of work they had to do, and sometimes thrilled that their role gave them an importance they had not anticipated.  They found out at every person in a feudal system is essential to the survival of the system, even the lowliest serf.  One of the students, a squire, reflected:

"My task for today was to perform my exhibition in front of all ranks in the whole kingdom! My skit or performance was very challenging to accomplish. It was hard because in my performance I had to jump a slash of a sword then drop to the floor to evade another blow then quicker than light get up and eliminate my enemy. After my performance I was the only squire to be promoted to the job of a knight. I am so happy to fight side by side with these brave and respectful men."
-CJ H

Although these lessons were valuable, we wanted our students to have to problem solve as well: ENTER THE VIKINGS!  One class of students were Vikings.  They decided to raid some of the kingdoms to get the food and supplies they needed.

"Today, we began working on longships. After we were halfway done with our first one, a hurricane appeared, and we lost everything. So we started making another longship, which we finished. Creating longships was not difficult, but it would have been much easier if we had not needed to restart. We will also raid some European villages, although I do not know which."
-Tim S

In the end, all of the kingdoms rallied to help each other out the crisis created by the raids.  They decided to celebrate with a medieval alliance ceremony.  Kingdoms even choreographed medieval dances to prove their unity and loyalty at the ceremony.

Although this unit is long over and we have undertaken many other projects since, this is the one my 8th graders still talk about.  They are even putting together a two page spread of pictures for their 8th grade yearbook dedicated to the experience.  Through role play, my students were engaged, motivated to do research, worked together, and even did a lot of writing to demonstrate their understanding.  It was rewarding for me and for them.
fedualism history role play weebly world history