War of 1812 Through the Eyes of Children... and Primary Source Analysis Skills Too!

July 12, 2011
Although I am also a participant, I had to opportunity and honor of presenting a breakout workshop at this year's History Connected summer institute.  Since the focus of the institute this year is on the impact that American wars have had on American society, I reached back into my files from a few years ago when I taught U.S. history in 8th grade to find a webquest I created on the War of 1812.  Teachers got to "play student" and take part in a shortened version of the 4 day lesson.  Click the screen shot below to see the webquest website. 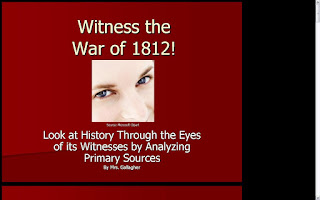 Here is a brief day by day guide of the primary sources and analysis skills that students use as they complete the 4 day webquest.
Day 1: Introduction to the Webquest and Madison's Declaration of War 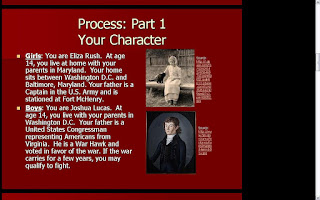 Students choose to be either Eliza or Joshua.  Both are 14-year-olds living in the United States before and during the war. 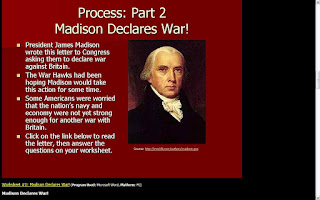 Then the students move on to reading Madison's war message explaining his reasons for asking Congress to declare war.  Since the lesson was written for heterogeneous classes of 8th graders, I needed to find a way to break down the speech into manageable parts. So, I put excerpts of the speech in a worksheet with missing words or phrases.  Students had to skim the speech for the excerpts to fill in the missing information and then answer guided questions that helped them understand the meaning of Madison's words.
After completing this analysis, students wrote a half page journal entry from the perspective of Eliza or Joshua reacting to the news and incorporating some of the reasons for war from the primary source into their writing.
Day 2: Old Ironsides - U.S.S. Constitution & the H.M.S. Guerriere 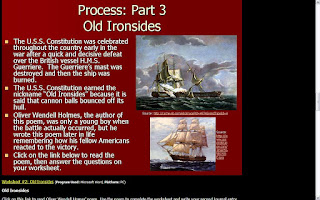 After reading some brief historical background on the importance of the battle between these two frigates early in the war, students read Oliver Wendell Holmes' peom Old Ironsides, which was actually written as a memorial several decades later.  Holmes remembers the reactions of his fellow Americans in his childhood during the actual war.  Reading 19th century poetry is daunting for 8th graders.  So this time, students are asked to choose one stanza and translate its meaning into their own words.  Then, as with Day 1, students write a half page journal entry from the perspective of either Eliza or Joshua reacting to the American victory and huge boost in morale.
Day 3: The Burning of Washington D.C. 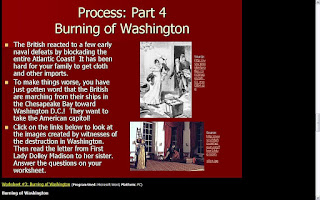 On the third day students experience a big let down after the huge victory of the U.S.S. Constitution early in the war.  The British successfully blockaded the entire Atlantic coast, and then captured and burned the capital, Washington D.C.  This time students look at an engraving and political cartoon that were created at the time reacting to the events.  They also read First Lady Dolley Madison's letter to her sister expressing her fears as the British approached the city.  To understand the significance of the images, students are either asked to identify items in them or to recognize the mood of each image to interpret the reactions that people had at the time.  For Dolley Madison's letter, students once again scan for excerpt in order to complete them and then answer questions about them.  Finally, once again, they write a half page journal entry from the perspective of Eliza or Joshua reacting to the horrible news. 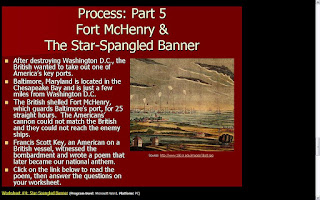 On the last day of the exercise students learn about the bombardment of Fort McHenry and the events that inspired Francis Scott Key to pen the poem that would eventually become our national anthem.  Once again, 19th century poetry is not the most engaging content for 8th graders, so they are asked to choose one of the stanzas that we do not sing as part of the anthem song and put it into their own words.  It helps students to understand that although the bombardment caused major destruction, the fact that Americans held the fort served as an inspiration to carry on.  Students then write one last journal entry reacting once again.

Reflection
Hopefully, after completing the 4 day exercise, students will understand the variety of emotions that can be triggered by war.  Typically there is enthusiasm at the start when people believe in the cause.  Early victories, like the U.S.S. Constitution, can fuel that fire.  But devastating defeats, such as the burning of Washington, tend to give people a dose of the realities of war and they might even start questioning whether the war is worth the cost.  The activity gives students, who have never experienced wartime sacrifice, some empathy.  In order for students to truly understand, and hopefully remember, history they need to be able to relate to the people who lived it.  Hopefully, this activity gave them an opportunity to do just that.
history war of 1812 webquest